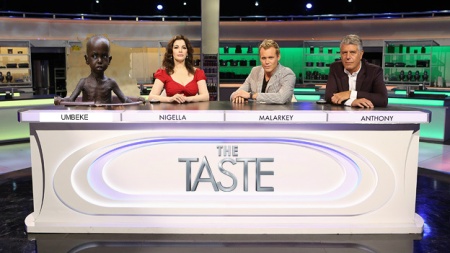 LOS ANGELES — Following Tuesday’s season one finale, producers of the ABC reality cooking show The Taste announced yesterday that they have finished a deal to replace Celebrity Chef Ludo Lefebvre on the judging panel next season with Random Starving Ethiopian Child “Umbeke.”

The move – which experts say should significantly increase the show’s ratings – will give the panel a broader range of tastes since Umbeke, according to producers, “will gobble down the weirder shit that even Bourdain won’t touch.”

Sources at the network confirmed that, while Umbeke doesn’t fully grasp the idea of reality TV, he is quite familiar with the concept of food-based competition, having once murdered an older boy from a rival tribe over the rights to a succulent caterpillar.

Speaking through his translator on the first day of filming, Umbeke was heard asking a producer, “So I eat all the food in spoon? Or I share with Los Angeles?”

Despite Umbeke’s initial confusion as to what he’s supposed to do, Producer Sarah Carlow believes he’s catching on quickly. Says Carlow, “This morning, we caught [Umbeke] curled up inside one of the refrigerators, gnawing away at a completely raw chicken. But, by the afternoon, we had him sitting upright in a chair. He’s coming along quickly, that one. I think he could be a major, major star someday.”

At press time, it was reported that young Umbeke had succumbed to Refeeding Syndrome – the fatal illness brought on by feeding a malnourished person too much, too soon – which producers say is tragic, since they already have filmed half the season, but that it should make for an exciting midseason plot shift.