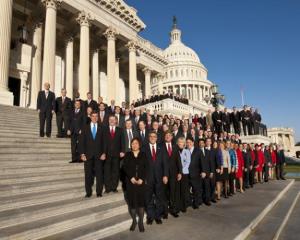 Above: Physicians have devised an easy-to-sort system, whereby they put red ties on all the ones who require extra assistance in performing such tasks as going to the bathroom, reading, and not licking Capitol building windows.

WASHINGTON — Following the September 16 rampage that saw Aaron Alexis gun down 12 people at the Washington Navy Yard, federal investigators have officially determined that the overwhelming majority of House and Senate republicans are clinically delusional.

According to Psychiatrist and Lead Mental Health Investigator in the case Dr. Opveyus, “We have examined all 249 republican congressmen, and the results are quite conclusive: they’re nuts.”

Asked to elaborate, Dr. Opveyus described the events that lead to this most recent (unless you count the 10 shooting sprees involving four or more slain victims that, statistically, occurred between the Navy Yard shooting and the publishing of this article 10 days later) shooting.

“It appears that, at some point in mid-April, just prior to the vote over whether or not to enact commonsense background checks for gun purchases, these legislators seem to have suffered some sort of traumatic event wherein their testicles were completely severed from their bodies, resulting in some sort of ongoing psychotic episode.”

Opveyus continued, saying, “In this unstable state, these senators and representatives are claiming to hear voices – voices they somehow believe belong to the American people – when in reality, the numbers show that the vast majority of Americans are in favor of commonsense reformation to existing gun laws. So, clearly, these politicians are clinically insane.”

Concluded Opveyus with a laugh, “It actually would’ve been more believable if these troubled men and women would’ve tried to tell me that a microwave told them to vote down the gun regulations bill. I mean, lets be honest, tales of a sadistic, talking microwave is, at this point, objectively more plausible than pretending most people don’t want less death. No sane person would say such a crazy thing. It’s silly, really.”

A source close to the legislators points to additional signs of their collective mental instability, saying, “While the laws within the most recently proposed gun safety bill may not have prevented Alexis from obtaining his murder weapon and killing a bunch of people two days later, despite his documented, very recent history of receiving mental health treatment and his police record involving a gun-related offense, that really says less about the effectiveness of the legislation and more about the sanity of the republicans who found the bill far too invasive for their gun-owning constituents to bear.”

At press time, it was reported that the crazed republicans were at it again, making their 42nd attempt to repeal the very legislation on which President Barack Obama was re-elected by a majority of the American people – Obamacare – which, conveniently, does cover most gunshot wounds.