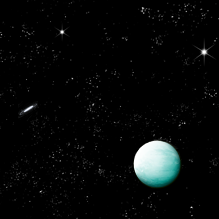 CAPE CANAVERAL, FLA. — Scientists with the NASA space program recently uncovered several million gallons of potable water — though no traces of carbonated liquid of any kind — on a large, nearby planet in what is being pronounced “a hugely disappointing discovery that in no way whatsoever helps the human species or its quest to find a realistically habitable alternative to Earth,” sources report.

According to the project’s lead researcher, Dr. Barry Klein, “The planet appeared, at first, promising; as though it may be able to support human life. However, upon closer inspection, we were unable to locate a single drop of soda. Neither Pepsi, nor Coke, nor Mt. Dew… not so much as a 12-ounce can of welfare Faygo, for God’s sake.”

Many speculate that the exoplanet — which is listed officially as PXR791+43Q, but which is referred to more commonly by the research team as “Planet Bullshit” — may yet hold answers in its vast supply of water.

Says Dr. Klein, “To the lay person, water in and of itself probably seems a good sign. However, the water on this particular planet isn’t even bottled. It’s just up there in a giant ocean, sloshing around in the fertile, nutrient-rich soil all filthy-like. Truly disgusting.”

At press time, reports indicate that NASA, in conjunction with the civilian space exploration company SpaceX, is planning a mission to the extrasolar terrestrial planet for later this year in an effort to “more accurately calculate the amount of MiO it would take to make PXR791+43Q worth a dick.”