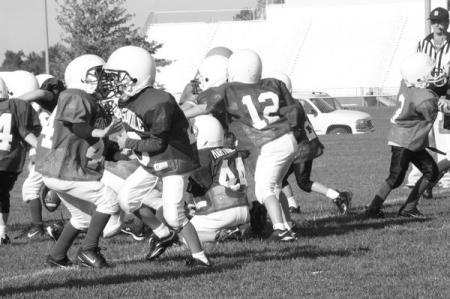 Above: Violence in the NFL wasn’t as big of a concern in the 1920’s because the players were much smaller and slower.

NEW YORK — In a coordinated police sting operation, authorities earlier today raided the homes of and arrested 1,696 NFL players, each of whom are accused of assaulting fellow NFL players.

According to Lead Police Investigator Charles Spillman, “We have reason to believe that each and every one of these men has assaulted and/or battered multiple victims; namely, each other.”

Spillman continued, saying “Except for approximately 64 of the suspects, that is, who are being brought in on separate charges of animal cruelty stemming from allegations that they have been kicking, ritualistically, the detached skin of hundreds or even thousands of innocent pigs.”

Added Spillman, “This is one of the more disturbing cases I’ve ever worked in my career. These guys are supposed to be role models and instead, they’re teaching young, impressionable, pee-wee-league-aged boys how to block and tackle. It’s just flat-out sickening if you ask me.”

In a written statement released shortly after the raids, the police thanked NFL Commissioner Roger Goodell for coming forward and notifying the law enforcement community of the wrongdoing.

At press time, it was reported that, in addition to the pending prison sentences, each of the nearly 1,700 professional athletes are expected to receive hefty fines from the NFL Head Office in response to the violent crimes.