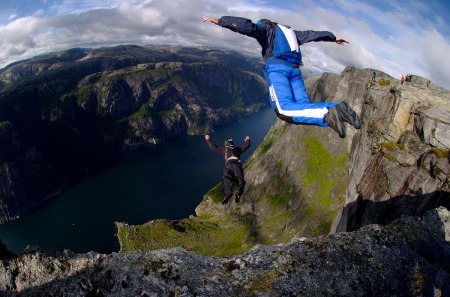 Above: Grainger’s friends told Reidicule News that “nothing about Felix ever came across as ‘strange’ in our opinion,” just before they jumped off this cliff in his memory.

LODI, CALIF — While base-jumping last week in a northern California ravine, Extreme Sportsman Felix Grainger’s parachute reportedly malfunctioned, sending the 28-year-old’s body crashing to the earth at an incredible rate of speed, whereupon he arrived at a gruesome, untimely death in what experts are calling “an entirely successful base-jump.”

According to friend and fellow adrenaline junky Brad Stenovich, “He nailed it!”

“It was the perfect jump from start to finish” Stenovich elaborated. “He started with a gainer off the ledge, then he got some tasty free-fall time, and finally, he ended it with a gnarly suicide. It’s what every base-jumper dreams of.”

“Obviously,” said Stenovich when asked if he, too, longs for the sweet release known as death. “I mean, why the fuck else would someone jump off a cliff?”

At press time, Grainger’s parents confirmed that a private funeral will be held on Friday at Redwood Park Cemetery for relatives and close, mentally-unstable friends of their equally-bipolar son.

One thought on “Extreme Sportsman Completes Successful Base-jump, Funeral To Be Held Friday”